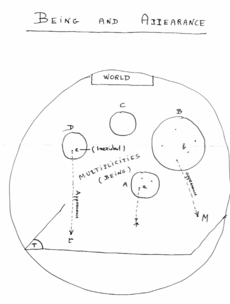 Lindsey Hair: Ontology and Appearing-Documentary Realism as a Mathematical Thought

ANTTI VEILAHTI
Abstract.
To accompany recent openings in category theory and phi-losophy, I discuss how Alain Badiou attempts to rephrase his dialecticphilosophy in topos-theoretic terms. Topos theory bridges the problemsemerging in set-theoretic language by a categorical approach that rein-scribes set-theoretic language in a categorical framework. Badiou’s owntopos-theoretic formalism, however, turns out to be conﬁned only to alimited, set-theoretically bounded branch of locales. This results withhis mathematically reduced understanding of the ’postulate of materialism’ constitutive to his account. Badiou falsely assumes this postulate to be singular whereas topos theory reveals its two-sided naturewhose synthesis emerges only as a result of a (quasi-)split structure of truth. Badiou thus struggles with his own mathematical argument. Iaccomplish a correct version of his proof the sets deﬁned over such a’transcendental algebra’form a (local) topos. Finally, I discuss thephilosophical implications Badiou’s mathematical inadequacies entail.
.
Η συνέχεια εδώ
.